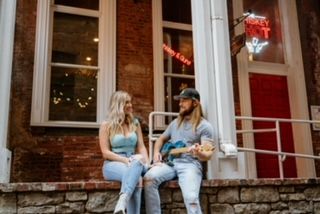 A Very Special Christmas Eve Performance with Luke and Kaylee

Get Tickets
Details
Luke and Kaylee came to Music City in 2016 to chase their musical dreams. The talented duo first crossed paths as students at Nashville's Belmont University, and found themselves performing and writing songs together. Fueled by their love for country music and passion for performing, they are celebrating several years as a powerful duo.
Northern California native, Kaylee, hails from a musical family and grew up watching her father play the drums professionally. It wasn’t long before she was sharing her gift, singing in both her father’s band and church. She later fronted a band which built a strong following, garnering more than five million streams on Spotify and opening for acts like Dwight Yoakam, Dylan Scott, Phil Vassar, Love and Theft, etc...
Luke is originally from Olympia, WA. He grew up playing the saxophone in marching band & singing in choir. He started a country band with his brother after he graduated High School and began writing songs. The two eventually won a National Songwriting contest that earned them a trip to Nashville and an introduction on the hallowed stage of the Grand Ole Opry.
The striking duo’s 2021 single "Backroad Flyin" has amassed three million streams, landing placement on Spotify’s Editorial Playlists: New Boots, Wild Country, Next From Nashville, and Chillin’ On a Dirt Road. Their latest single "Chevrolaid Back" - produced by Zach and Colton Swon, was released in September 2022.
Refund Policy

Cancellation Policy
Cancellations are non-refundable, but your reservation may be transferred to another performance of equal or lesser value, at no cost.
Reschedules are done manually - come on in, or reach out to boxoffice@clubgreenroom.com

A Very Special Christmas Eve Performance with Luke and Kaylee